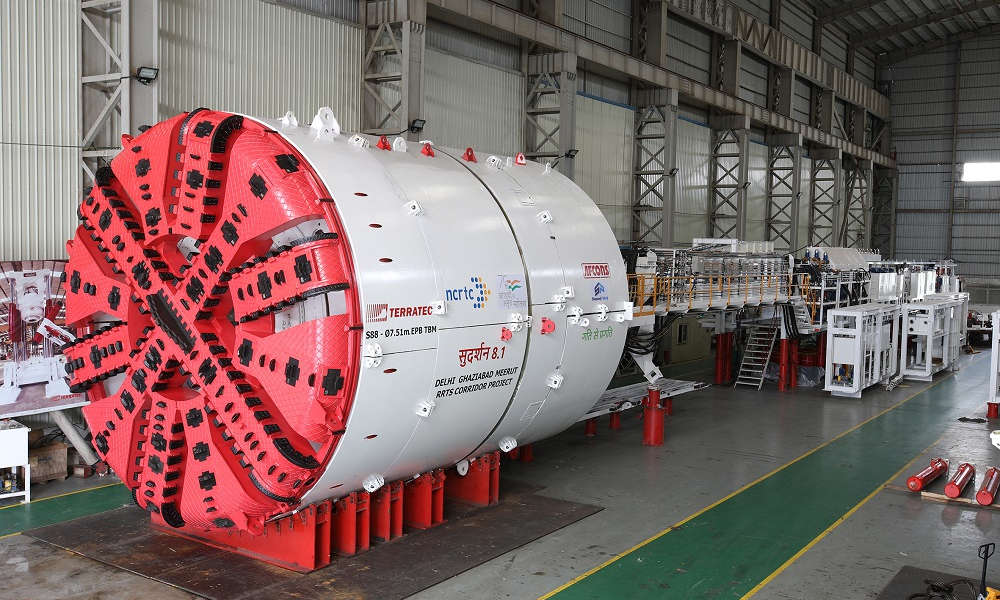 Three (3) TBMs can be utilized by the contractor Afcons Infrastructure Restricted to finish the tunneling works for Bundle-8, Brahmapuri Down Ramp to Begumpul Up Ramp part of the Delhi-Meerut Regional Speedy Transit System Venture. Bundle 8 contains an underground tunnel of seven.12 km and three underground stations.

After profitable manufacturing unit acceptance checks at TERRATEC’s facility, the TBMs will now be transported to India. The TBM will then be reconnected to the positioning with the assistance of the TERRATEC discipline service crew.

In early 2022, the primary two machines can be launched from Bhaisali station the place they may go by way of dense residential areas and beneath industrial buildings. Then the third TBM will journey by way of an excessive proper radius in the direction of Begumpul station. The geological situation alongside the tunnel alignment could be sand, silt and clay.

For the required geological situations, the contractor chosen three 7.51m EPB tunnel boring machines geared up with dome-type cutterheads. For added versatility, TERRATEC has designed the cutterhead to permit the reducing software to be interchangeable for the 17” disc cutter, permitting the TBM to bore by way of D-walls and keep away from any sudden bumps in its path. Permits to face up to the presence of an impediment, comparable to an outdated nicely or basis.

The Regional Speedy Transit System differs from the Metro in that it caters to commuters who want to journey lengthy distances with fewer stops and better speeds.

The Delhi-Meerut Regional Speedy Transit System (Delhi-Meerut RRTS) is an 82.15 km lengthy, under-construction, semi-high velocity rail hall connecting Delhi, Ghaziabad and Meerut. With a most velocity of 180 km/h, the gap between Delhi and Meerut can be lined in lower than 60 minutes. The operation of the Delhi-Ghaziabad-Meerut RRTS hall is anticipated to widen the divide in favor of public transport within the area from 37 per cent to 63 per cent, which finally helps in decreasing air pollution. The complete 82 km lengthy Delhi-Ghaziabad-Meerut RRTS hall is anticipated to be operational by 2025.

For extra info go to: www.terratec.co